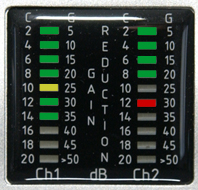 Last week I came across a forum post that expressed envy. A long time pro-audio producer who worked exclusively on the PC platform stated that after taking one look at what Apple has done with Soundtrack Pro 2, serious decisions were in the works. My guess is that we may have another switcher on our hands.

I’m sure this person was able to maintain a high level of productivity on his PC’s. Conversely, I have to agree with him. This new STP UI is stunning to say the least. I realize that functionality, performance, and stability are essential when striving for consistent productivity. Personally, I think visual aesthetics play an important role as well. I can’t imagine spending hours buried in an ugly piece of software … I need to be impressed with the application environment as I work.

These issues of application UI aesthetics and attributes continue to puzzle me when considering the Pro Tools phenomenon. There is no question that Pro Tools is the industry standard, and I don’t need anyone to remind me of this. The problem that I have with Pro Tools is that is just looks so dated. But let’s be frank – it does what it is designed to do very well. I don’t see any reason to believe that widespread use will diminish anytime soon… Back to Soundtrack Pro 2 … 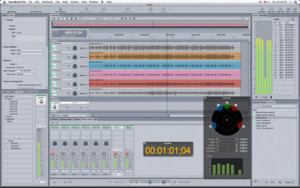 This UI is an example of how things have changed in this latest version. I dragged a six channel 5.1 file from the browser into the multi-track project pane.

The producer is presented with a few options: 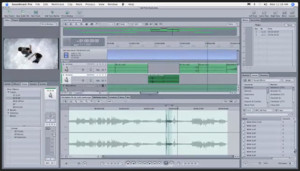 • Incorporate individual files that represent individual channels extracted form the original. [this is done by holding the option key while dragging].

There are a few important things to note: the Surround Matrix HUD is associated with the selected track. If you choose not to use the HUD, the mini surround pan controllers located on each channel take over. The cool Timecode HUD is fully customizable [size and location]. Lastly, the Level Meters at the upper right adapt to project channel configurations.

One last point – notice the single channel strip at the lower left. The displayed strip is once again dictated by the selected track. Lets say for example I decided to switch out of the mixer display tab in the lower work-space in order to check metadata. The single channel strip allows me to maintain control of each channel level, sub-mixes, buses, and the master output while the mixer is hidden. 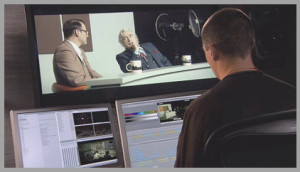